Working as the Innovation Manager of Synlait Farms gave Ryan Higgs the opportunity to see first-hand the challenges of tracking staff and contractors across their 13 farms.  They had hundreds of people coming and going every day, but they didn’t know who was where, what they were doing and if they had the information they needed to get on with the job.

This was back in 2014, way before COVID-19 brought location-scanning to everyone’s lives.  This was a health and safety challenge for Synlait who wanted visibility, to be able to communicate with visitors and to ensure visitors weren’t getting injured on their properties.  Having searched the market for a solution, they realised there was nothing that met the needs of the agri-sector.

“So we decided to start a company,”

says Ryan, who is now the CEO of Onside.

Ryan started the company with co-founders Juliet Maclean who co-founded Synlait and Michael Falconer, who was advising Synlait Farms at the time. The trio realised there was a sizable need; Juliet and Michael already had good experience building businesses and Ryan was interested in tech, so they decided to “give it a crack!”

In its simplest form, Onside enables rural contractors and property managers a digital check-in tool to know when people come and go from properties to improve operations, communications and compliance.

The bigger vision is to create a global network to revolutionise biosecurity.  Early on, the team realised that by mapping movements between rural properties they were constructing an enormous network of interconnected movements around the rural sector.  It wasn’t just people that were moving, but they were also moving animals, equipment, plant material etc which is how pests and disease are spread.  Every time there’s a biosecurity incursion, it costs billions of dollars to the economy, a whole lot of people get affected and it destroys businesses.

The team feel really motivated to solve the problem and are now developing a solution which will enable industries and governments to use the network that is created to get ready for and respond to new incursions across entire sectors to protect individual businesses and New Zealand’s economy.

Boots on the Ground Growth

Globally, the agri-sector is going through a period of rapid digitisation and Onside now has around 40,000 registered users, 12,000 properties mapped and has generated 1m connections across New Zealand, Australia and the UK. Ryan is particularly excited about the Australian market which seems less digitised than in New Zealand, but they are very keen for the solution.

Leveraging the relationship-driven way that the agri-sector operates, Onside’s go-to-market model is a network-based referral system.  They’ve built relationships with a number of farm businesses who invite their contractors to use it; the contractors start using it and take it to other farms they work in.  This approach has driven rapid growth in Australia and New Zealand and has even seen customer growth in the UK where they have no sales presence.

Supporting this growth is an internal team of software engineers, testers, product people and designers and the marketing and “revenue” teams, covering sales, customer success and account management – bringing in revenue and ensuring customers are happy, well-serviced and growing.

The core of the team is based in Christchurch’s EPIC Innovation, which Ryan says is a great environment – space to have meetings, places to collaborate and plenty of people to share war stories with!

They are growing their sales presence in Australia and Ryan is currently building a strong leadership team to support their growth.  They’ve recently recruited a Head of Marketing and are now hiring a Head of Revenue to join existing Heads of Product and Tech.

They have recently recruited two independent directors to add expertise and strength to the business as it grows – Neil Fletcher, the CEO of Christchurch-agritech company, Invert Robotics and Fallon Savory, a revenue growth expert.

Ryan says they have a great product, a big market opportunity, a big problem to solve and lots of capital available; the challenge is to get the people to help them execute.

Seed investment of $2.5m last year has given them a runway for growth, bringing on good people and driving into Australia.  They’ve also got their eye on a Series A capital raise later in 2022 which will push them into further growth in Europe and the USA,

“…those markets were enormous….we could be a billion-dollar company for sure,”

believes Ryan and yes, the plan is to remain based in Christchurch.

He’s on a steep learning curve, but Ryan Higgs is having fun growing a global giant from Õtautahi!

Listen to the Onside story with founder Ryan Higgs on our EPIC Podcast here. 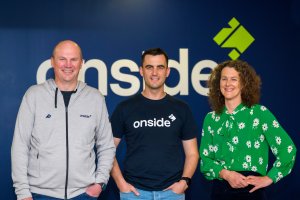